Loss Sets has been included in the Electronic Literature Festival, You/I at Winona State University and Making Humanities Matter (University of Minnesota Press).

Loss Sets translates poems co-written by Jordan Scott and Aaron Tucker into sculptures printed with 3D printers. The project aims to respond to the multiples of loss (physical, environmental, artistic, personal) that occur in 2016 and, as such, the poems respond to a number of topics that include ISIS’s destruction of millennium-old artwork, the melting of Canadian ice fields and sculptures, the death of loved ones, prosthetics, decaying memories. The sculptures were then built in response to these losses and guided by concerns around the future of what 3D printing, as guided by a utopian, post-capital world in which any object can be made or replaced, will be conceived of and used for.

Loss Sets came about as an extension of Tucker’s earlier work with Jody Miller on the ChessBard and his interests in using computer programs as collaborative creation and translation tools, speaking to his interests in how computer programs read and create and how humans and “human” documents, like a poem, might be read differently by different computer softwares and manifested using different hardware (a 3D printer for example).

Working with Ryerson’s Digital Media Experience Lab, the Ryerson Geospatial Maps and Data Centre and the Ryerson Centre for Digital Humanities, the poems are first turned into coordinates along the X,Y and Z axes after which, under collaboration between Namir Ahmed, Tiffany Cheung and Aaron Tucker,  those points are mapped into the 3D modeling software Rhino; using the Rhino plug-in Grasshopper, the models are further manipulated by using geographical information from the Columbia Ice Fields until a sculpture is “carved away” from a 32x32x32 cube. The results are then printed using a 3D printer.

You can find the source files and a ton more pictures by visit the github page that is in progress: https://github.com/atucker82/dhsi2015_3DPoetry 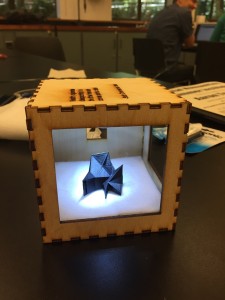 To begin with, we started fairly simple: we created a set of rules in which 32 characters (26 letters, 6 punctuation marks)mapped to 32 numbers (a=1, b=2) across the x, y and z axis. From there, each word was cut up into units of 3 and those three characters were then mapped to their corresponding coordinates on their respective axises. 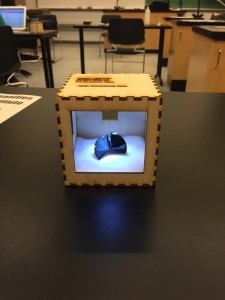 The first iternation of this project invloved Aaron modelling (“building from nothing”) rather than sculpting (starting with a set object and subtracting). The included translation of “First Fig” by Edna St. Vincent Millay was made by first translating the poem into units of three, then mapping those coordinates in Rhino. We then connected each point on the X-Y axis, then connected the X-Y points with another line up to the Z axis. This process created the included “wireframe” versions that can be seen in their respective folders. He then moved these “frames” into Sketup and began connecting those points to create “faces” and closing it off into a 3D model, pictures of which are also included.

At the 2015 DHSI, the first prototype was created in response to a poem generated by Margaret Konkol (New College of Florida) & Andrew Pilsch (Texas A&M) which they called Stein in Six Dimensions which cut up and recombined Gertrude Stein’s “A Box” from her collection Tender Buttons. A photo of the original text as generated by their software and an Arduino board can be found under the appropriate folder. Aaron then followed the same process as described above when translating “First Fig” and, after exported as an .obj file, was printed using a MakerBot: The Replicator.

The second sculpture was generated using Processing with the extremely generous and inventive help of Devon Elliot. In this iteration, we used the basic “Geodesic” sketch from the HE_mesh library and input the basic x-y-z coordinates used for the first model. The sketch then “carved” a shape from the geodesic based on those coordinates. This sculpture was different than Model 1 in that it was computer generated (rather than Aaron going through and connecting the points) and points to a much more useful and interesting version of the project. Many many thanks to Devon Elliot!

Sculpture 2 was made by Tiffany Cheung and Aaron Tucker using Rhino and Grasshopper and established the accepted workflow for the foreseeable future. The source poem was translated into 3D data points using the simple algorithm described above. From there, those points were put into Rhino and mapped onto 3D space; using Grasshopper (a Rhino plugin), those points generated 3D “faces” that were then carved out of a 32x32x32 cube and then printed using the 3D printers at Ryerson University’s DME lab (on glow in the dark filament!).