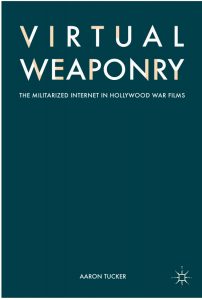 I am the author of two scholarly film books  Virtual Weaponry: The Militarized Internet in Hollywood War Films (Palgrave Macmillan, Fall 2017) and Interfacing with the Internet in Popular Cinema  (Palgrave-Macmillan, 2014). You can find a review of Interfacing by Grace Holden at Science Fiction Film and Television and a magazine article (in French) that utilizes my work at numera.

This project catalogues and analyzes representations of a militarized Internet in popular cinema in order to argue that such illustrations of Internet-enabled technology encourages a 2016 movie audience to view the civilian internet and its usage as potential weaponry. This encouragement promotes an unhealthy transhumanism that simplifies the relationships between the biological and technological aspects of that audience, while also hierarchically placing the “human” components at the top; such filmmaking and movie-watching should be replaced with a critical posthumanism that challenges the relationships between the audience and their technologies, as well as critiques problematic notions of modern warfare. The book interweaves a history of the Internet, specifically focused on its military use, with real world examples alongside analysis of contemporary cinema in order to track how the introduction of the Internet into the war film has changed the genre and how the movies often function as one part of the larger Military Entertainment Complex and Total War.

Interfacing with the Internet in Popula Cinema 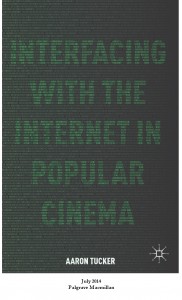 This collection of essays tracks the history of the Internet through the last 30 years of popular films, exploring how the Internet is, at once, the most terrifying and most beautiful invention of the 20th century.  In it, I close-read films like The Net, Hackers and The Matrix trilogy, along with more recent works such as Tron: Legacy, The Amazing Spiderman, Iron Man 3 and Avatar. Themes include: the history of the internet and its shift from FTP to browser to dense interconnected devices; the internet as suburban intruder in film; how the internet is bridging the uncanny valley ; the internet, movies and apocalypse; how the internet has moved from global village to global city; the military Internet; surveillance and how to police Web 2.0.

You can find conference papers and presentations from both projects by following this link.