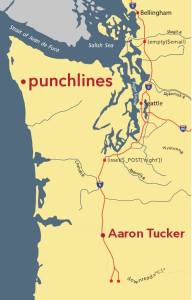 “A road trip down the internet highway parallels a real trip down interstate highways. Aaron Tucker is situated between text and hypertext, between surrealism and the quotidian in a text replete with visual markups, as he slides between digital and analogue in a pensive glissade. The languages of www and html signage get absorbed into his “journey of discovery,” mixed with genres like Tweets and emails and riddles. Tucker takes soundings while in motion in this inventive book.”
-Rachel Blau DuPlessis
author of Drafts

“Remember “looking at a sunset and feeling”? Aaron Tucker blueprints an architectural emotion founded in small-town boredom. That small-town being the Internet or Aberdeen or the sunset. What kind of funny is it when a computer program is your therapist? Punchlines.”

Aaron Tucker’s poetry arrives an “algorithmic maw” to the bodies of lovers spooned on a bed, to their sweet nothings and to their lungs pouring incessantly outwards. Tucker’s is a poetics where the algorithm is everything and everything is algorithmic: speech, the ocean floor, and our responses to poems. With fierce intelligence and humor, Tucker urges collaborations with hyperlinks as much as we do with lungs and with our speech, “inseparable from code.” Punchlines beautifully navigates this computer-user collaboration as tidal thrums between love, boredom, desire and disappointment in both memes and memories. Tucker sees only the erosion of forms; and poems as codes, used to exclude the text from being and beings betrayed by language. Punchlines wants us to ask what algorithms do when we work “through the splitting apart of we.” Nothing funny, just punch lines; and this is the poetics Tucker so sincerely innovates: a complex and desire-full confluence of body, love and the technology that rhythms us and our loses. It’s all a joke, really: on us, on them. On those who believe poetry can handle any of this alone. In Tucker’s Punchlines, we are something beyond lungs and hyperlinks, and find our lines forever now with Tucker’s, spilling-out all over.

Punchlines is a poetic exploration aimed at distorting the relationship between mass audience and individual performer by highlighting the hyper individual experiences and thought processes of understanding and telling jokes.

I am particularly interested in exploring the nature of the call and response – performing some of these works in Toronto I’ve tried to take on a very different reading persona than I’m used to and encourage more conversation between reader and audience (especially heckling). The titles of the poems then become especially important: they alternate between simple grade school joke-punchline structure and more probing therapist-style questions. Ideally the reader answers the question/title first then reads further to see the narrator’s response.

As such, this is poetry very specifically situated in the persona of a lyric “I”. The construction of these poems come from this very specific narrator that is battling depression and a creeping self awareness of mediocrity. As the poems progress I want the poems to become less structured and stable and more language based and absurd – right now they read rather prosaic but I plan to begin to fracture these into increasingly more and more strange and less and less sensical riddles.

You can also purchase a wonderful chapbook version of this project from above/ground press. It’s cheap! Buy 3