I am the author of two books of poetry: irresponsible mediums: the chesspoems of Marcel Duchamp (BookThug Press, Fall 2017) and punchlines (Mansfield Press, 2015).

In 1968, avant-garde artist Marcel Duchamp and composer John Cage exhibited Reunion, a chess performance that took place in Toronto. Whenever Duchamp or Cage moved a piece, it generated a musical note until the game was transformed into a symphony.

Inspired by this performance, Irresponsible Mediums—poet and academic Aaron Tucker’s second full-length collection of poems—translates Duchamp’s chess games into poems using the ChessBard (an app co-created by Tucker and Jody Miller) and in the process, recreates Duchamp’s joyous approach to making art, while also generating startling computer-made poems that blend the analog and digital in strange and surprising combinations. 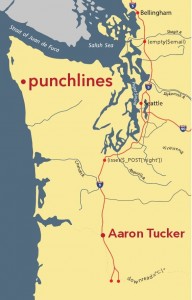 My first book of poetry, punchlines, was published by Mansfield Press in Spring of 2015. punchlines is a lyric long poem that probes the poetic tensions in the everyday languages of computer-user collaboration. Within the narrative structure of a Canadian couple’s drive down the West Coast of the United States, the poems set this exploration between the call (poem title) and response (the poem itself) of jokes and punchlines, echoing the input-output (call/response) of modern computer-user cooperation, with the ultimate goal of infusing code with poetry and poetry with code. The first section is the initial trip down the coast while the second section houses poems in response to the return trip. There is little stopping in this long poem: the poems are told while driving or while in intermediary places like hotels and restaurants, and are deliberately full of jerky and fast hyperlinking motion.

punchlines follows my first manuscript, apartments, which was published as a chapbook by both above/ground press and The Emergency Response Unit and was a finalist for the 2010 bpNichol National Chapbook Award in Canada. apartments is a unpublished poetry manuscript that explores a non narrative poetic discussion of space in the landscape of Toronto, where every inch and foot is contested, every block gridded, every house and building carefully demarked, labeled, defined. The intersection that the work is most concerned with is the crossing of language and architecture. Being in the city means being constantly deluged with words and phrases alongside our buildings. We are swarmed with letters and dialogue whether it be through ads or storefronts, stray stereos or intercoms: the question that the work keeps returning to is where can an individual find space to live and language to express his/herself within a city.

Smaller works from both apartments and punchlines can be found under the further works section of the website; the webpage includes work that has been published in an online format as well as some audio and video performances.  You can also find reviews of my work under the Reviews Of section.